The Stitch ›  Trolls and Tribulations – Social Media and Public Health

Ahhhh, social media… For many of us, we have been slow to see it as more than a nuisance; at best, just another official distribution channel, at worst an irrelevant source of superficial selfies and cat memes.

It is arguably only in the last five years that social media and the technology that puts it into everyone’s hands has had such a major influence on public health efforts – in ways both good and bad.

We did a reverse image search of this vaccination meme. Forgetting the hundreds of thousands of likes and retweets etc. the actual image was found in nearly 16,000 separate places online. When’s the last time your FAQ, factsheet, or infographic had the same reach?

But online misinformation and organized networks of resistance have also chipped away at many of the public health gains we’ve made in the last half-century.  Social media may not have given birth to the mistrust that feeds Ebola in DRC, Polio in Pakistan, and Measles circulation in the United States, but it has inflamed and amplified it. Now, anyone with Internet access has the ability to deliver communication at scale – rapidly, personally and directly.

We wanted to dig into not only what’s different now, but whether global pubic health systems and institutions are even designed to respond in this uncharted and capricious landscape.

Clay Shirky has mapped this exact terrain for more than 25 years. A pioneer in treating the Internet as a serious subject of study, Clay seeks to understand how social media affects group behaviour, large organizations, and the ability of both to coordinate and influence change.

We’re devoting nearly this entire issue to our chat with Clay and to the role of social media and the Internet on public health and trust in global institutions.

We’re grateful to Clay for talking us through all this. We learned a ton. We hope you do too.

Social Media – Opposition and Opportunity
You may already be one of the nearly two million viewers to check out his prescient 2009 TED Talk: “How Social Media Can Change the World”. Or maybe you’ve read, Cognitive Surplus or Here Comes Everybody (selected by Guardian as one of the 100 greatest non-fiction books of all time) where he considers “what happens when people are given the tools to do things together, without needing traditional organizational structures.” Either way, there is no doubt that Clay has been a trusted and optimistic voice on all things Internet for decades.

He is the first to acknowledge that he is not a public health expert, but his ability to link the networked world to institutional character and response gives him unique insight to the challenges we are currently facing. And in particular, a practical approach to the, ‘what do we do now’ question.

We had a really hard time trimming our one hour chat down to a 5 minute clip. And as you’ll see here, we didn’t quite succeed.  But we hated to leave so many of his valuable insights on the editing floor, so we’ve broken this 10 minute piece into chunks. We hope you listen to the whole thing, but if you prefer to dive into a particular section we’ve broken it up below. 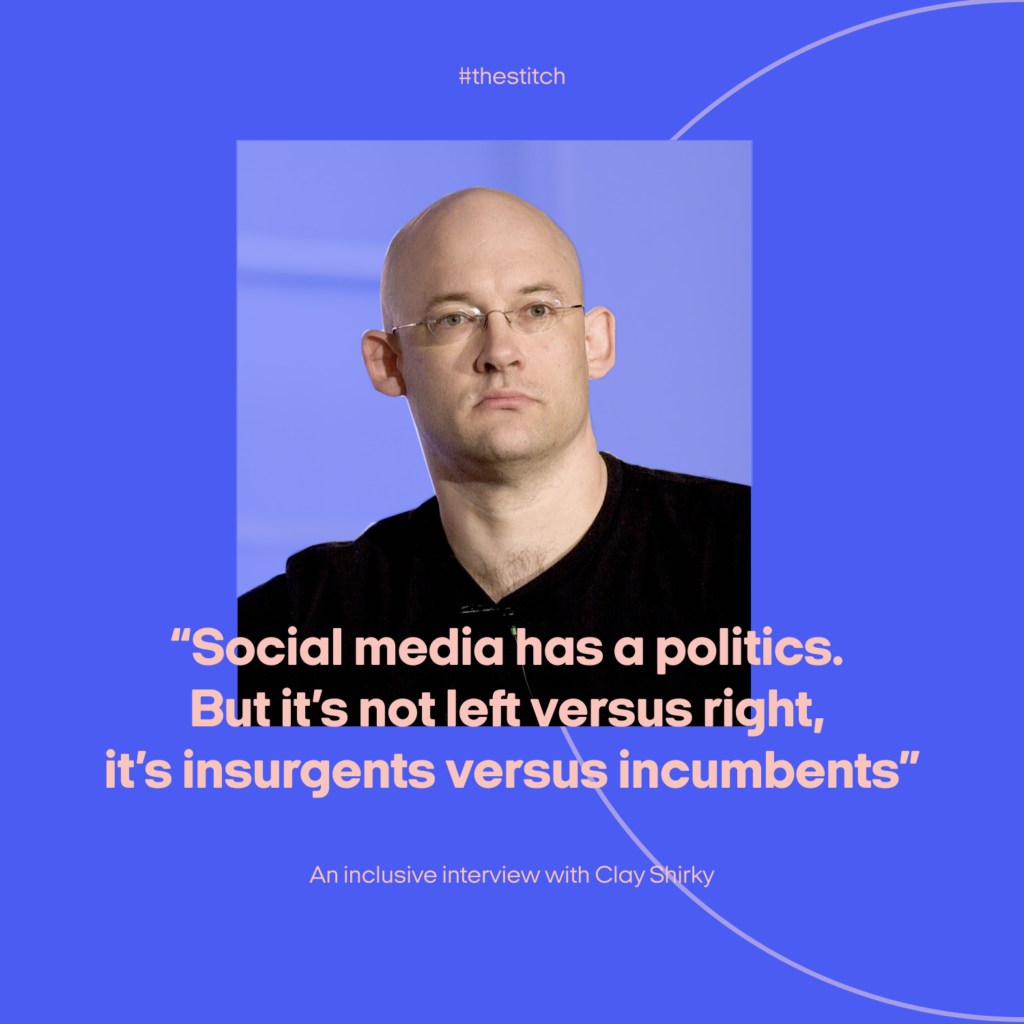 The Politics of Social Media: Incumbents vs. Insurgents
Shirky argues that public health institutions are right to feel disoriented by the increasing importance of social media. They no longer have a monopoly on information at scale. In fact, communities are often better-equipped and more media-savvy than the institutions long accustomed to controlling the flow and content of information.

He argues that the way to think about the politics of social media is not left versus right, or poor versus rich, but as Insurgents versus Incumbents.

LISTEN: “What we thought was trust in institutions was an information vaccuum…” (02:16]

Stories and Science: The urgent need for both
People don’t believe things based on evidence, and we are competing not against a counter-fact, but a counter-story. And normally a story told or shared by someone known in the community, not an outsider organization.

Shirky argues that we need to increasingly find ways to use stories to impart biomedical information that can protect people, and respect their community traditions, norms and networks.

LISTEN: “It’s stories as a way for people who don’t have any sense of science as a way of thinking about the world, can still integrate new practices into their life in a way that makes sense…” (04:52)

So rather than a message of doom, he argues that public health organizations will learn how to better respond to these challenges.

Trolls and Tribulations: Experiences We Can All Learn From

Global public health campaigns aren’t all stuck in the stone age. Here’s a few experiences, papers and tools you might learn from.

Bad News!: Get to know a misinformation campaign from the inside in this simple online game. The goal is to get as many followers as you can while slowly building up fake credibility as a news site.

Wellcome Trust’s 2018 global survey confirms that people’s beliefs about science are deeply influenced by their culture, context, and background.

Paper (2018): Belief in conspiracy theories:  “originate from basic social motivations that characterize intergroup conflict, namely to uphold a strong ingroup identity and to protect against a threatening outgroup.”

Get inspiration from some of the world’s best public health social media campaigns.

Mike prepares to trade mi quang for stout in the land of saints and scholars, while still recovering from #wethenorth.