If you’ve ever asked Siri a question, been motivated to run by a nagging watch, or suddenly realized you were flirting with a charming chatbot, you know our daily interactions, our access to information, our choices, are increasingly mediated by machines.

If you’re anything  like us, it feels less like: “the Robots are coming!!!” and more like, “damn, when did they get here, and who invited them?”

Algorithms, pattern recognition, neural networks and deep learning –  all part of the broader family of machine learning and artificial intelligence – will only continue to expand their influence on our lives. Our friends at ideas42 think “machine learning is poised to revolutionize the application of behavioural science.”

Giving us a glimpse into the utopian and dystopian potential for AI in global health, Johanna Skilling of Burson Cohn & Wolfe, talks us through what  happens when technology evolves to reinforce or replace human interactions in healthcare. Is empathy a purely human trait, or can it be engineered? She lays out the argument during her recent SXSW talk.

Otherwise, it’s just a regular day at the office for Common Thread. Sherine is just back from Geneva, where we joined the global Demand Hub for Immunization, and presented our analysis on how GAVI could better engage civil society to build demand for immunization. Mike’s in Senegal, joining global experts to design solutions to better integrate and democratize DesignforHealth.

Check out our social feeds if you’re curious about what else we’re up to. We’ve got a growing team of Associates and Partners who are doing lots of exciting stuff! If you haven’t had a chance to meet our expanded team, you can have a look here for more info. We’re always adding and looking for new and inspiring talent. Get in touch!

Engineering Empathy in the age of AI
This month, we speak with Johanna Skilling, Executive Vice President of Strategy at Burson, Cohn Wolff on the impact and future of machine learning on health and behaviour change. Like your FitBit that tells you when to move, sleep and decompress, AI is starting to play a bigger role in patient care, in mental health diagnosis and through supportive nudges to follow health behaviours. And now, with tech that can pick up on patterns in our speech, eye movements, and expressions, machines can be programmed for empathy. AI could just spark the next revolution in behavioural science. 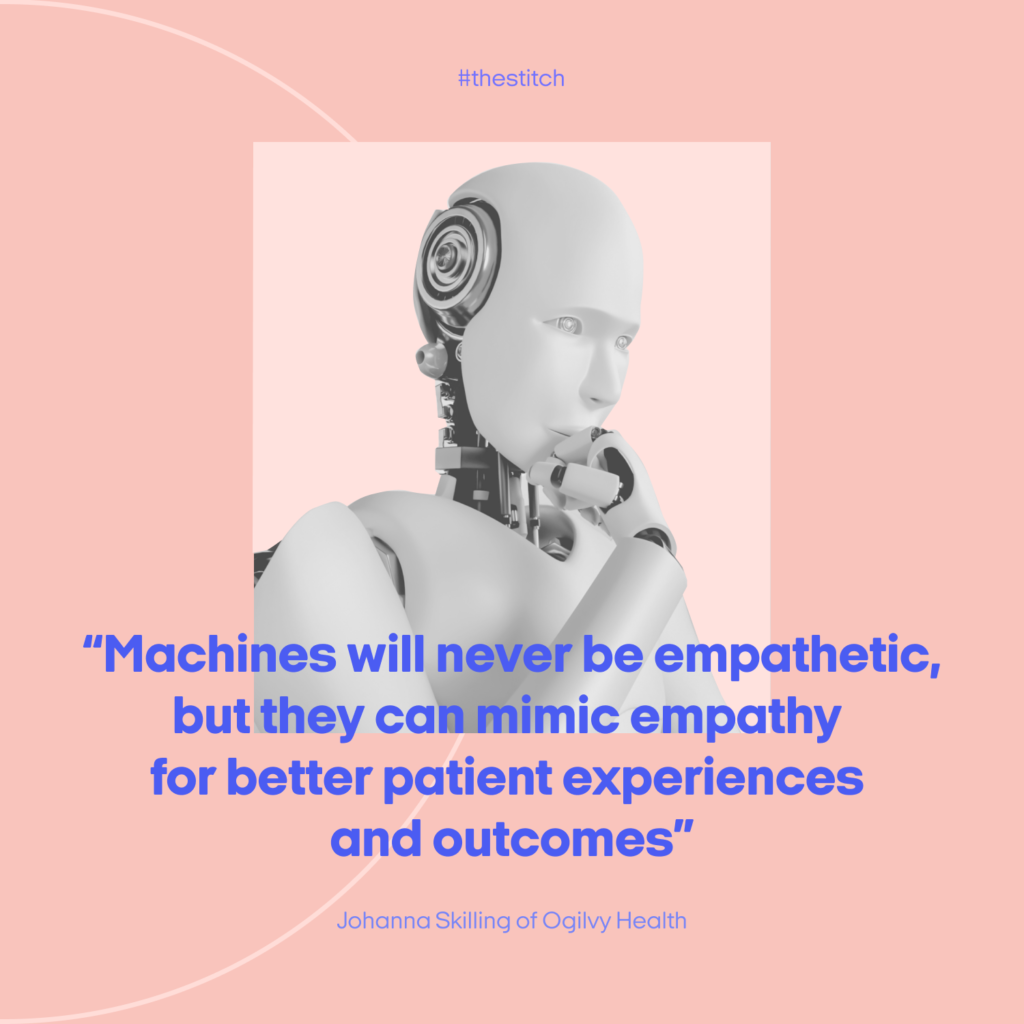 At the best of times, our health care is in the hands of rushed, overworked, multi-tasking doctors and nurses. Of the predicted shortage of nearly 18 million health workers by 2018, the largest needs will be in Southeast Asia (6.9 million) and Africa (4.2 million), all in the backdrop of an increasingly complex global health context.

Now imagine a doctor whose new  companion is a machine that can scour databases of symptoms, personal history, research, test results and more in seconds. Cardiologist, and author of Deep Medicine, Eric Topol, believes that AI can save healthcare professionals valuable time to focus on the patient, bringing empathy and human interaction back to health care. In an emergency context, a few extra seconds can save  lives.  In a developing country , he says, AI may democratize health care by providing equal access to the mountains of data, research and studies, providing the latest thinking on challenges to human health.

But AI is big data, and thus only as good as the information that goes in, and the algorithms which process it. AI’s “white guy problem” and the possibility of ingrained bias is something we all need to think about. Unless the technology is used by developed and developing countries alike, AI has the potential to widen disparities and inequality. But fear not, AI can help solve this problem, too. A recent working paper authored by Sunstein and Mullainathan among others, argues that algorithms can help expose inherent and unconscious bias of its creators.

So you’re not out of a job just yet! AI will increasingly be part of how we work and how we think about reaching people and influencing positive behaviour. Whether or not your next doctor’s visit will include a robot with good bedside manner, is still up for debate. Watch this space.

Why you should care about a frog-pocalypse
Imagine if a new disease started wiping out 6.5 percent of all mammal species. That would be pretty much “everything with hooves…and flippers.” That’s basically what Bd –  a deadly fungal disease  – has been doing to frogs over the last 50 years, and frog experts are starting to freak out. For one disease to decimate a species that’s been evolving for 370 million years, is a big deal – and not just for the frog world. Increasingly, humans are succumbing to fungal diseases, too. Not a surprise: turns out human behavior – in particular, global trade –  has a hand in spreading or curbing Bd’s deadly path.

Which epidemic do we tackle first: Mistrust or Ebola?
A new Lancet Study reiterates a growing lesson in public health: mistrust – not science – can be the biggest obstacle to stopping an epidemic. One in four people in DRC’s Beni and Butumba – the epicentre of the world’s second-biggest Ebola outbreak – believe Ebola doesn’t exist. These disbelievers are 15 times less likely to seek treatment at an Ebola health centre.

You say Placebo, I say Placeb-oh!
Ten amazing placebo-related findings are unpacked in this awesome overview of the fascinating and sometimesmaddening research findingson the placebo effect, including how some doctors are better at inducing its benefits than others.We bet you can guess how.

The Lessons that are Sticking With Us

You’re biased – but don’t get defensive
For those of us still coming to grips with the difficult truth that we’re hard-wired for bias, own it! Recognizing our inherent biases can help us find ways around them more quickly. Since changing the way we’re built is unlikely, disrupting bias by the way we design systems can lead to more equitable outcomes. For the first time last year, two female scientists won the Nobel Prize in the same year.  Human rights activist Nadia Murad, a Yazidi woman from Iraq, also received the Nobel Peace Prize. These women, like so many before them, have done amazing work worthy of these honours, but they were among the first to be recognized. What changed? When Nobel nominators were  invited to nominate three people (or groups of people) instead of just one, a woman’s name was more likely to appear in the list.

What’s Distacting Us From Our Work

Podcasts for Public Health Nerds
In thelatestattempt to make epidemiology cool (it is, btw!), CDC has come up with a podcast that tells the story of the response to issues of public health concern. With exciting titles like: Ethics of Infection Control, Enhanced Surveillance for Coccidioidomycosis, Novel Poxvirus in Proliferative Lesions of Wild Rodents in East Central Texas, it is truly a public health nerd’s This American Life. We like this episode that parallels zombies in literature and emerging infectious diseases.

When your wife becomes an anti-vaxxer
A husband, a wife and Jenny McCarrthy give new meaning to the phrase “three’s a crowd.”  This hilarious investigation into one couple’s marriage is a cautionary tale of how a little obsession with celery, lemons and other innocuous antioxidants can take you down the dark path to anti-vaxxing. This guy’s so desperate, he’s willing to invite an epidemiologist into their bedroom. Click here to apply… (Just kidding! But if you did click, you might need to ask yourself some hard questions. No judgement.)

Mike wasted time hitting refresh for freakishly realistic AI generated faces, to distract himself from thoughts of the coming singularity.

Sherine‘s been learning the hard way why you should never skip out on the flu vaccine.