We’ve just learned of an imminent alien attack. A slow-moving invisible assault from an unimaginable distance; a war declared by an unseen malevolent force seeking to destroy our way of life.

Their attack plan is simple. They will gradually release poisonous gas into our atmosphere. They will seek to erode our coastlines, and to increase the world’s temperature to levels that will fundamentally change our ecological balance. Cities will be lost. More people will be sick. Our grandchildren will face an uncertain and likely more insecure future.

What is it about this scenario that makes us want to jump into action? To urgently mobilize the world against a common enemy? Is it the binary, us vs them appeal? Is it the military metaphor that is easy to rally around? Is it the lack of personal responsibility for the threat? Is it the visceral evidence of the attack?

After a summer hiatus, The Stitch is back! This month we dip our toes into the (rising) waters of communication and behavioural insights for climate change. In public health, the impact of climate change on disease and the health of the most vulnerable is undeniable. Maybe if we saw climate change as an existential attack by a common and intergalactic enemy, we would be more likely to feel the urgency and join forces to act for change.

Until that faithful day, we’ve spoken to experts and collected a few articles below to start the conversation here on earth.

At Common Thread, the temperature is also rising with more and more interesting work on the horizon. We’ve had an amazing response to our recruitment drive and there’s still time to send us your C/V. Have a look at the profiles we’re looking for.

See you next month! 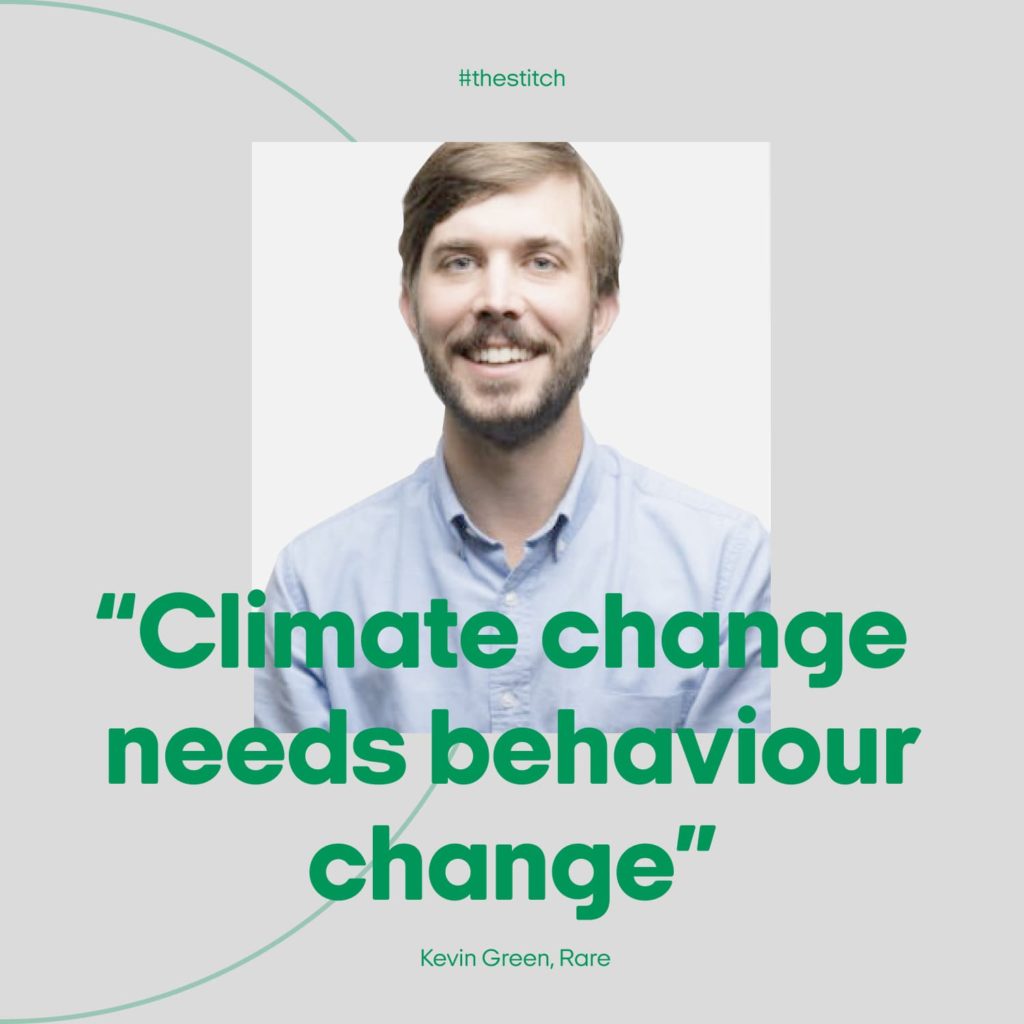 The ‘kitchen sink’ approach hasn’t worked
This month we speak with Kevin Green, Head of Rare’s Center for Behavior and the Environment to help us work through all this. Rare is bringing the best of behavioural and social science research to people on the frontlines of climate action. Kevin explains why we’re hardwired to ignore climate change. He challenges the view that individual behaviour will have minimal impact on emission targets. To prove it, the Center has just identified 30 individual behaviours that have the potential to reduce about a third of the projected cumulative emissions from 2020 to 2050. Read it all in their hot off the presses report (PDF).

Everyone else will be doing it!
Maybe people aren’t engaging in the fight against climate change because of the perceived inaction of others. Like this research into dynamic norms and pre-conformity. The authors saw increases of  vegetarian orders in restaurants simply by telling diners that more people were trying the meatless menu options, highlighting  not current behaviour but a change that is in process and liable to continue. Others are highlighting this by emphasizing the importance of promoting leaders who go against current norms to inspire collective action for climate action.

Stealth Climate Change Denial
Slogans like ‘Climate Action Now’ sound hollow because they rarely speak to or acknowledge our competing commitments to fuel prices, energy security and economic growth. This article and the 2013 study it references sheds light on Stealth Denial. Those who say they accept the reality of man-made climate change, but have no emotional connection, do not feel their actions contribute to the problem, and feel their contribution would be insignificant to limiting climate change.

It’s about a positive, emotional appeal to promote political action… obviously
Here’s a roundup of where we’ve gone wrong on climate action: We’ve focussed too much on individual change, too much on fact, and not emotion. We’ve failed to show that climate change is a problem that can be solved. We’ve failed to acknowledge that people are motivated more by present loss than future gain. Shifting to a positive message of the future and encouraging political action may be the answer.

“And how did that make you feel?”
This article puts climate change on the couch and finds that our minds are constantly shielding us from difficult knowledge that might challenge our identity, life choices, or values. So how do we align truth about the science with emotional security? “Simplistic demands for changes in behaviour take no account of the complexity of people’s feelings about climate change or the way in which behaviour is locked into social structures and expectations.”

Is fear of vaccine hesitancy causing scientific self-censorship?
The vitriol and misinformation surrounding vaccination is causing some scientists to self-censor what they say and to whom. But should researchers be more careful when findings (like these) might frighten the public or feed the antivax conspiracy machine? As the author says, “Progress requires scientific candor and a willingness to ask inconvenient questions.” Ironically, the 806 comments below her opinion piece may show that bad science and good science will be cherry-picked to suit entrenched points of view, regardless of good intentions.

Mirror, mirror who’s the ‘empathiest ‘of them all?
Absolutely fascinating work into visual perception and Mirror Visual Feedback. Mirror therapy has helped amputees to feel relief and is now being tried on people with unexplained pain, stroke victims and arthritis. Can mirror neurons help explain empathy? A small 2009 study speculated that sufferers of phantom pain could experience relief by simply watching someone else massaging or flexing their own hand

Are memes the moral conscience of the Internet?
Memes can help us tap into common, relatable emotions or experiences. They can model social norms and highlight socially acceptable and unacceptable behaviour by carrying a behaviour to extremes. Are there implications for how we think about online influence and behaviour? Absolutely. But first, study up!

Rock or Bach? Your playlist is your personality
A large-scale study found that reactions to music predicted differences in personality. Measured against 5 common personality traits used in psychology (openness, conscientiousness, extroversion vs introversion, agreeableness and neuroticism). Open? You like jazz and classical, and hate adult contemporary and rap. Extroverts liked country and singer-songwriters. Agreeable people !surprise! liked all music. The conscientious among us were the most difficult to predict and probably had better things to think about. Prepare for the age of personalized marketing muzak.

The Lessons that are Sticking With Us

What happens when we see ‘The Man Behind the Curtain’
The authors of this paper want to revisit Choice Architecture to take into account what they call, social sensemaking: what people will infer about the choice architects’ intention, goals and beliefs. Decision makers should not be seen as passive targets of behavioural design. It’s like my two-year-old who sees the cues and knows what I want, and is now more likely to do the opposite… cuz she sees right through me.

Protecting the Great Barrier Reef with a force field
Faced with a complex conservation challenge, these behavioural scientists looked beyond heuristics, biases etc. to Lewin’s now 65+ year-old concept of Force Field Analysis to identify and reduce factors hindering their goal. A good reminder of the massive toolbox we need to constantly review and draw from.

What’s Distracting Us From Our Work

Exploring phantom islands
Strap on your headphones and explore this interactive sonic atlas of islands that were historically sighted, charted, described and even explored – but their existence has never been ultimately proven. Part maritime history project, part sonic poem, it’s haunting, fascinating and with sea levels rising around us, charting mystery islands may be a future need. Go get a headstart.

There’s an app even for that
Five apps for the fashionable and discerning humanitarian worker ranging from meditation to equipment. Our favourite? This free and open source field data collection tool.

Mike obsessed over the sexual development of mosquitoes and deciding who should get a postcard from Timbuktu.

Sherine dug deeper into the vaccination practices of Roma communities, and rekindled her appreciation for Romania after a month in the US.