This month we ask ourselves, are we ready for the next global pandemic?

The consensus seems to be we’re due for a big one. Not a, “everyone’s off work ‘cos Jane sneezed on the coffee machine again” kind of situation, but an epidemic that would fundamentally disrupt life as we know it: food supply, the global economy, energy, productivity, transportation, foreign relations, health care, causing significant death on a global scale.

What can we do now to minimize or even prevent the Next Big One? What role can behavioural science, and all of us working in the field, contribute?

Well, (and we’ve been waiting to say this since we started The Stitch), we went to the person who wrote the book on the subject.

The End of Epidemics (2018) by Dr Jonathan Quick is an urgent plea to the global health world to get out of our crisis-complacency cycle, before the next big one. It’s a blend of research, personal experience gained over a 40+ year career in global health in 70 countries, and practical recommendations for how we can prepare, respond and invest so the next pandemic doesn’t turn into pandemonium. Skip to his interview below (we’re trying out a new format, let us know what you think).

We also hope that our new website will go viral (see what we did there?). After months of planning, design, writing and debugging (did it again) we launched last week. It’s forever a work in progress, but we hope you like it. One space we hope you visit regularly is our Field Notes section. It’s a bit like the tuxedo t-shirt page of our website — less formal, a bit more fun. It’s where we’ll post what we’re up to, what we’re reading, where we are in the world, some blog posts, audio files and back issues of the Stitch.

Thinking about redesigning your site? Maybe read this first.

And, happy birthday to us!  Common Thread celebrated our 2nd Anniversary last week. As is often said about parenting, the days are long but the years fly by. We’re excited to bring this toddler of a business into what is already shaping up to be an exciting 2020.

Thanks for all the encouragement, advice and inspiration this year. We couldn’t do it without you. 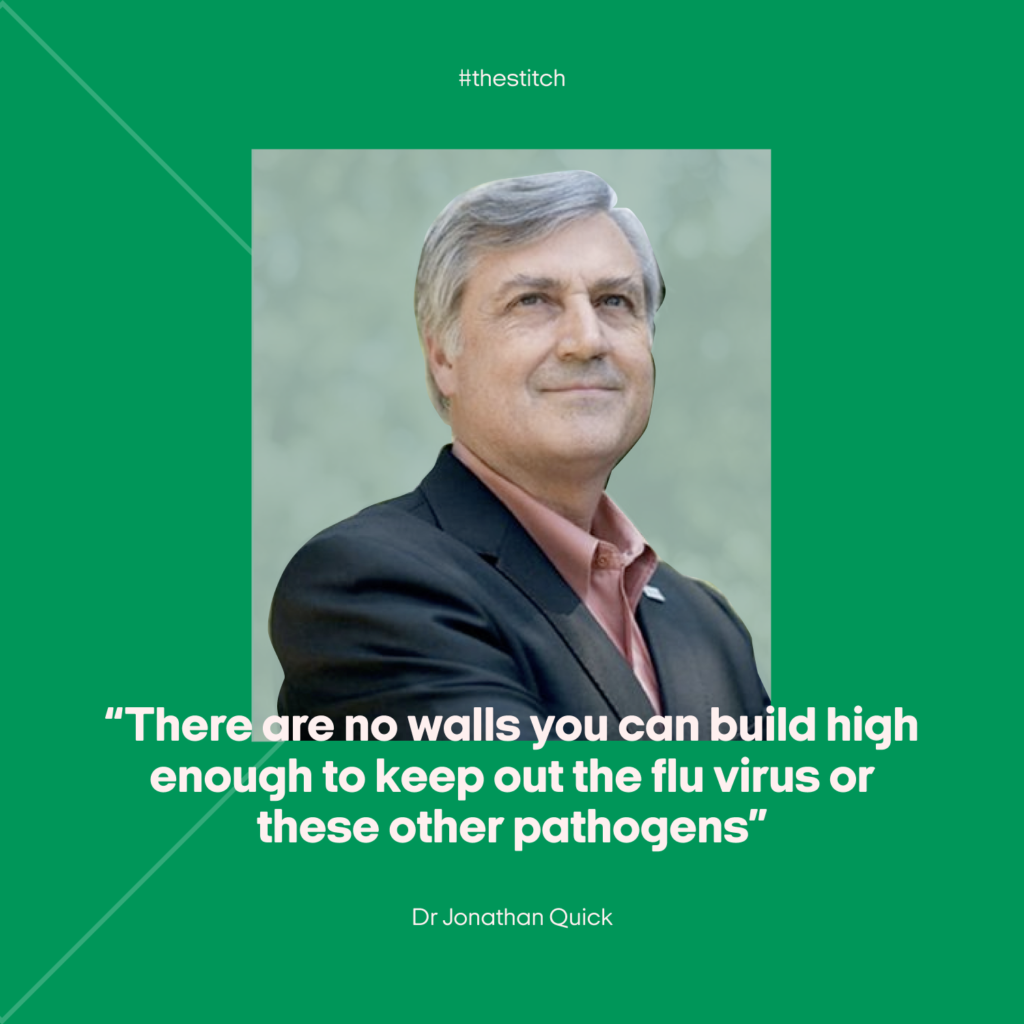 New diseases are discovered every year, and there are millions more we know virtually nothing about. Population movement. Environmental degradation. Climate Change. Government mistrust and science scepticism. The risk has never been higher.

The WHO’s 2019 Global Preparedness Monitoring Board report warns of “global catastrophic biological risks” that the experts agree, the world is not prepared for.

The GPMB predicts that an epidemic like the 1918 Spanish Flu, in today’s context “… with a population four times larger and travel times anywhere in the world less than 36 hours, 50-80 million people could perish.”

Dr. Jonathan Quick thinks we should be. But why are warnings falling on deaf ears?

In The End of Epidemics, Dr. Quick looks back on 100 years of outbreak response, and discovers a consistent pattern: first we panic, then we forget.

We reached out for an interview to help us understand why.  When have the world’s health institutions saved us from pandemics, and when have they failed to show up? He  gives us his outlook for the future, explains the urgent role of behavioural science and community engagement now more than ever, and what the (likely) nightmare scenario looks like if Governments and Health Institutions don’t make  a significant investment to safeguard our future (Spoiler: It’s not good).

Dr. Quick is an instructor of medicine at the Department of Global Health and Social Medicine at Harvard Medical School and Chair of the Global Health Council. He is Senior Fellow and former president and CEO at Management Sciences for Health in Boston. He has worked in more than 70 countries.

Read more
If you have Netflix and just want a primer on the risks of a global pandemic,check out Explained’s  20 minute episode, The Next Pandemic.

War Games
Reporting from behind closed doors of an October pandemic scenario exercise for global health leaders. ““The issues may be table top scenarios today, but they could be real tomorrow. This is our new normal.”

Predicting the irrational
As this piece argues, addressing disease is “no longer a matter of merely concocting a vaccine but also persuading people to roll up their sleeves for it.”

Why we don’t invest in things now that protect us later: A quick primer on Present Bias as it applies to healthcare. Could finding the antidote to global Present Bias be the trick we need?

What can we learn from AIDS advocacy playbook? Here’s a handy list.

Pinging for good
With increased risks in urban settings, our constantly pinging cell phones are offering huge opportunities for epidemic surveillance and control.

Vaccination needs a Greta Effect
“To impact behaviours and reinforce trust in vaccines, it is not enough to fight against (and thereby risk legitimizing) the anti-vaccine movement. Instead, we need to start a new pro-vaccine movement, taking inspiration from what we see in the fight against climate change.”

Searching for climate change’s “Big Bang Brand”
Inspired by a 100-year-old rebrand of “hypothesis of the primeval atom” to the more t-shirt and sitcom friendly, “Big Bang”, advertising experts are sharpening their Sharpies to try to tackle the insipid and uninspiring label of Climate Change… Emission Critical? Climate Chaos?

When ‘The Man’ is a Machine
Governments across the world, under the guise of efficiency, are using the power of AI to automate poverty — turning the needs of vulnerable citizens into numbers, replacing the judgment of human caseworkers with the cold decision-making of machines. Check out the Guardian’s whole series on what one researcher called a ‘Digital Poorhouse.’

Not do without, but do differently
Recent social psychology research has found that encouraging people to take action on climate change by moving our focus away from sacrifice and towards the potential gains of living not worse, but differently have huge potential to motivate pro-environmental actions.

Trust Works… Both Ways
We were flattered to be interviewed for this report on putting community engagement and participation at the centre of outbreak response and preparedness. It’s great work by the IFRC and Anthrologica team: “Whilst communities are frequently told to trust the response, the response must learn to trust the communities it serves.”

The Lessons That are Sticking With Us

From, “I know you are, but what am I?” To “What are you? I’m listening…”
Changing deeply held world views is tough work. Here are two tactics you can try before you face off with table-pounding Uncle over holiday dinner.

Chalk it up to… dirty hands
We’re all searching for elegant solutions that make it easier to influence change. In rural Indian schools, kids still write with chalk and slates, so Ogilvy Mumbai and soap company Savlon designed chalk infused with soap. Check out the video case study.

Global Public Health’s ‘Foreign Gaze’
It’s fairly clear now that long-term change in low and middle income countries is brought about by local process, policies and dynamics. So how come the vast majority of academic literature in global public health does not feature the local experts at the forefront of addressing local problems? There’s “something deeply wrong with that literature, because it does not reflect reality. Imbalances in authorship are a tangible proxy for concerns about power asymmetries in the production (and benefits) of knowledge in global health.” Deep stuff, people. Dig in deeper here.

What’s Distracting Us From Our Work

It’s a Kind of Magic
Sherine met Vice Chairman of Ogilvy-UK (and founder of its behavioural science practice) Rory Sutherland at the launch of his book ‘Alchemy: The Surprising Power of Ideas That Don’t Make Sense’ in Romania recently. They discussed how ‘making room for magic’ could help stop disease in the most challenging contexts, like Ebola-affected DRC and polio-affected Pakistan. Here’s Rory’s 10 rules of alchemy – also known as “how to profit from being less logical than everybody else.”

Who’s laughing now?
Despite the starkly negative reviews in the media, The Joker has been insanely profitable, earning around $750million in its opening month in cinemas. We’ve been interested in the commentary around the subjects in the film – mental health, bullying, loneliness. Many feel it leans heavily on damaging stereotypes, but attention like this is golddust for mental health advocates to create dialogue, increase awareness and correct those misunderstandings. It’s also a fascinating display of empathetic storytelling. We found ourselves horrified to be rooting for a mass murder.

This Newsletter Was Produced While
Mike revisited the pale blue dot (“it underscores our responsibility to deal more kindly with one another, and to preserve and cherish… the only home we’ve ever known”), had Lankum on repeat and shared this very handy gift-giving algorithm with anyone asking what to get his girls for Christmas. Happy Holidays friends.

Sherine recovered from the never-ending celebration of Sinterklaas, just in time to get ready for “Mommy’s Santa” to come. Happy Holidays, everyone!