Spotlight: An Interview with Ben Monroe

We were struck by this Washington Post article, published last year, that documents what it takes to classify, track and be a few steps ahead of a virus that threatens to go global. To dive a little deeper into the topic, we sat down with Ben Monroe, a Health Scientist working on Monkeypox with CDC’s National Centre for Emerging and Zoonotic Infectious Diseases.

Ben talks with The Stitch about the critical importance of communication and the complexity of working in the Tshuapa Province of the Democratic Republic of Congo, considered the global epicentre of Monkeypox transmission. 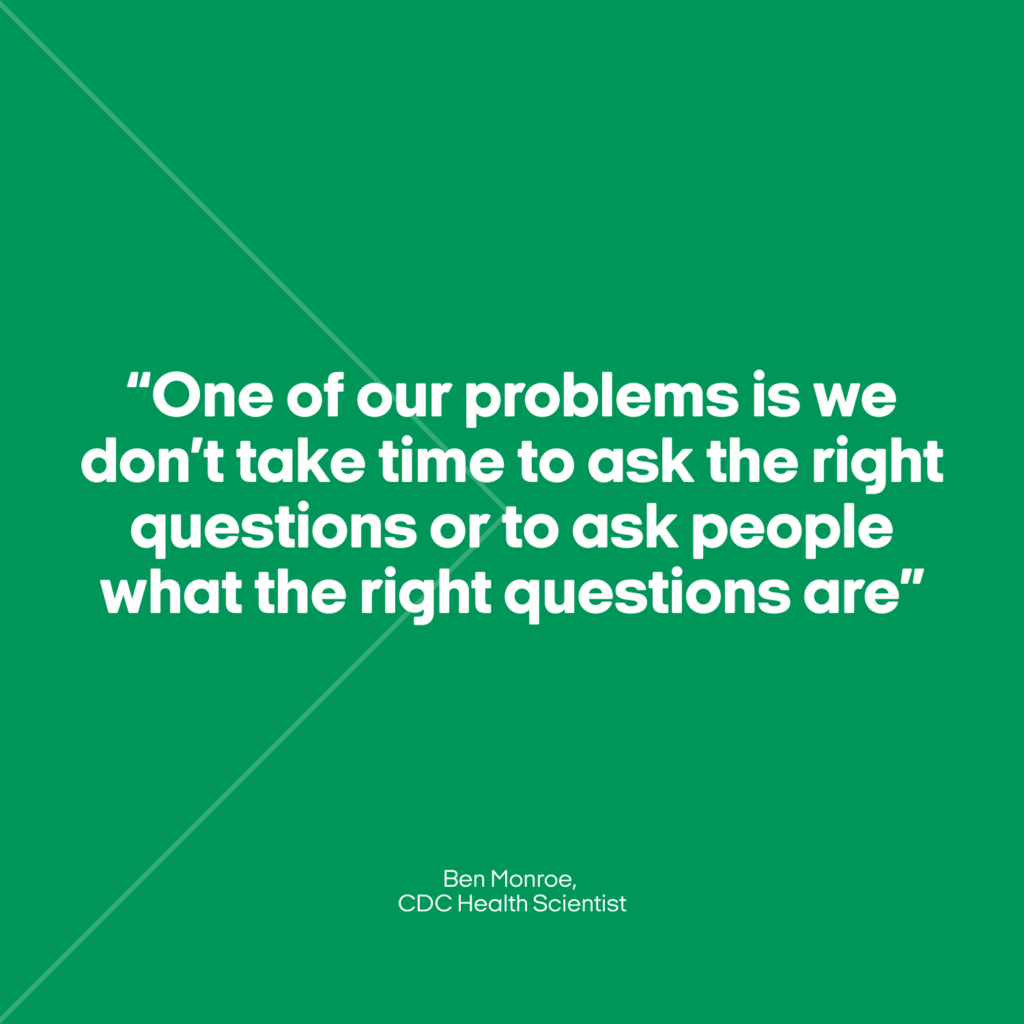 CDC works with the Kinshasa School of Public Health and INCEF to produce films to promote community dialogue, education and discussion on prevention and reporting of Monkeypox cases. As we hear from Ben, understanding community context, priorities, knowledge, practices and beliefs will only strengthen the response.

NPR’s Goats and Soda (highly recommend the podcast!) followed up with a reality check on the threat of Monkey Pox (which has now spread to 23 of Nigeria’s 36 states, according to the BBC). As the NPR Q&A highlights, Monkey Pox has been exported once before from Africa. The US outbreak in 200 was the first time cases were seen outside of Africa. All transmission was traced back to people coming in contact with prairie dogs purchased as pets.  Here’s WHO’s factsheet on the disease if you want to learn more.

These are the unsung heroines of polio eradication.
We are deeply saddened to hear about the death of Sakina Bibi and her daughter Rizwana, 16, two vaccinators who died last week as they were giving polio vaccine to children in the Balochistan province of Pakistan. These ‘Sehat Muhafez’ – or Guardians of Health – who go door-to-door each month vaccinating children against polio are some of the bravest women in the world. Read more about the risks these heroic women take every day to rid the world of polio.

The Stories We Can’t Stop Talking About

Good news, it’s not your fault that you ordered that pricey bottle of Merlot.
Menu engineers nudge us to order that expensive bottle of wine and eat that cake. How can writing, design and choice architecture be used more for public health?

Why facts don’t change our minds.
Great to revisit this Elizabeth Kolbert article in the New Yorker about the limits of reason. (If like us, you’re interested in natural sciences and climate change, Kolbert’s Pulitzer Prize winning book is also a cracker).

Can’t stop, won’t stop – and the science of “when.”
Researchers look at why it’s so hard for our brain to shift gears and stop a plan in motion after we’ve made the decision to act. And that brings up another important subject: timing. It’s the subject of Daniel Pink’s new book, which examines how the science of when we do things is a key determinant of human behaviour.

You can’t neutralize bad behaviour with good behaviour.
And yet, haven’t we all used that idea at some point to justify our poor choices? In some cases, that’s called moral licensing, which is when we “license” a less-virtuous behaviour (like eating a brownie) if we’ve recently done something more virtuous (eating a salad for lunch). This study about compensatory health beliefs (CHBs) caught our eye. Someone with CHBs thinks that they can offset the consequences of unhealthy decisions – like binge drinking – with other healthy behaviours. Could this have implications for public health campaigns? We also dug up this CHB model scale. It could be a useful tool to adapt to analyze unhealthy behaviour against the competition.

Ah, the power of making a harmful choice a little bit harder to make.
Could adding ‘hassle factors’ to vaccination exemption processes make parents more likely to vaccinate their children? U.S. researchers are gathering data on how applying behavioural insights has impacted the way parents treat vaccination. Watch this space.

The limitations of using fear to promote healthy behaviours.
If you don’t know the podcast Hidden Brain, you’re missing a great lesson on making sound research accessible, actionable and fascinating. This episode looks at the limitations of fear on changing our behaviour. Spoiler alert: It works for one time behaviours, but isn’t so great for long-term change and repeated behaviour. It could even be counterproductive. Dig further into the fascinating papers cited on workplace mammograms and Dolores Albarracin and colleagues analysis of fear effectiveness.

And Speaking of Research…

What happens when behaviour change fails?
Even behavioural scientists themselves need incentives for exemplary behaviour – in this case, admitting failure. This article tells an important story about the chronic difficulties involved in getting people to take prescription medicine. “We have a long way to go before we can assume [behavioral economics] is a cure for what ails Americans,” the author writes, explaining how traditional ‘nudges’ have, in many cases, failed to have an impact on patient compliance. Is this truly a failure for behavioural science or a programme design flaw? We’d love to hear your thoughts.

Stickers are not a nutrition panacea.
And speaking of admitting failure, this is a good example of coming clean on a widely accepted study  – now retracted – on using stickers of popular kids’ characters to get them to choose the fruit over the cake.

Where am I? Who are you?

This is a space where we hope you’ll join us every month as we explore how behavioural science can improve global public health. For us, the exploration began many years ago. As we worked on polio eradication and the West African Ebola outbreak, we began to see that focusing on people – their motivations, their context and social norms, and the gap between what they say and what they do – could lead to more kids vaccinated, better protection from disease, and to more resilience to disaster. But we also saw a missed opportunity: many of the organizations working on public health rarely infused their strategies with the full potential of these insights.

So we created Common Thread. It’s a company that puts human behaviour at the centre of public health. We hope this newsletter will be the beginning of a conversation with you on how to do this work well.

Thank you for starting this journey with us.