How could public health use social media more effectively — from adapting scientific messages to ‘flatten the COVID-19 curve’, to using trusted stories to change behaviour and #StayHomeSaveLives?

We reached out to NYU’s Vice Provost of Educational Technologies, and distinguished internet and social media theorist Clay Shirky to ask him about social media, science and stories – and the role they all need to play in public health initiatives.

Our original interview preceded the outbreak of COVID-19, but the messages for public health communications are even more pertinent now, when a pandemic is no longer a foreboding warning, but a grim reality.

MIKE: Have institutions overlooked the opportunities that social media can bring to public health? And what are they missing?

CLAY: People spent so long assuring one another that social media was just going to be unimportant that when it turned out to be something that people would forego food to have, the totality of the importance of communications to the human condition has only just started to sink in.

The thing for public health people to understand about social media is it has a politics, but the politics isn’t left versus right, it’s insurgents vs incumbents.

The internet increases the ability of dispersed or disorganised groups to communicate with each other…and it’s become clearer than ever that the days of only one answer are gone and that trust adheres more to the people you know than the institutions you don’t.

MIKE: How does social media challenge official public health communications from governments or other institutions?

CLAY: I am not a public health person so the work I have done has always been in concert with someone who can translate. Whatever the long term values of the internet are for public health the short term question of ‘what do we do about this?’ comes up all the time. The news is mostly bad for traditional organisational methods.

What we thought was trust in institutions was mainly an information vacuum.

We’ve discovered that when they’re given no choice, people say they trust government or other institutions more than when there is a choice.

MIKE: So what happens when there is a choice of public health communications?

CLAY: When you add the internet to a communications situation to people with a set of goals or beliefs that are somewhat out of sync with the mainstream you get all these ‘insurgencies’ which are not necessarily political and certainly not violent.

The anti-vax people in the United States is an insurgency.

The internet benefits polarisation over moderation — in part because whoever it is at an extreme is almost by definition ‘locked out’ of access to the regular organisational and broadcast tools of the media — and now has this new capability.

MIKE: So what could the future hold for social media during a disease outbreak?

CLAY: Longer term the internet increases the flexibility of communications and co-ordination for everybody.

We’re seeing places where the ability to respond to these situations, improvisationally at first, turns out to be a useful complement for the larger more organised responses.

MIKE: How should public health organisations be using social media? How can they get the science across to people through these formats?

CLAY: People look for comforting stories — we all do.

The ability to communicate with people has obviously exploded this century but it has begun with communications gaps. It’s only now that public health experts are realising that they can’t compete against a local story with science.

Instead there are places where they are saying I can go in with biomedical information and a story — it’s not science vs stories, it’s stories as the way that people who don’t have any sense of science can think about the world and still integrate new practices into their life.

MIKE: How can a national or global health message cut through to something that’s heard locally?

CLAY: You will have to work pretty hard to arrive at the point of asking, ‘How can we identify locals who will help us intervene?’ or ‘How can we talk to people who will tell us what story will make the scientific message palatable in this context?’.

The disconnections between the ‘globals’ and the ‘locals’ does not need to be as bad as it currently is and there are ways to develop a sense of ‘Here’s how I would operate on the ground if there were a disaster there’ — so that when the time comes and you are in a particular place you are not operating without local knowledge.

MIKE: How can we help public health organisations to adapt their culture and messaging?

Non-Profits have almost the inverse position, we are very complacent and self-unmoving when things are fine, but during a crisis, they can be surprisingly adaptive, in part because the demand for our services and our income are not completely tied together.

My bet for public health and for public health communications is that one crisis at a time these organisations are going to adapt. If we don’t adapt these tools and techniques we will not be able to deliver what we have promised and if we do we may actually not only be able to catch up but do better than we were doing.

You can find Mike’s full interview with Clay along with other experts we’ve interviewed for our newsletter The Stitch on our SoundCloud.

We worked with UNICEF Ghana to explore how wayfinding can help the vaccine opportunistic.

In October, we celebrated five years of loving what we do and who we do it with.

For World Refugee Day 2022, we worked with NaTakallam to bring you a story about a refugee who holds on to the keys of his past homes. 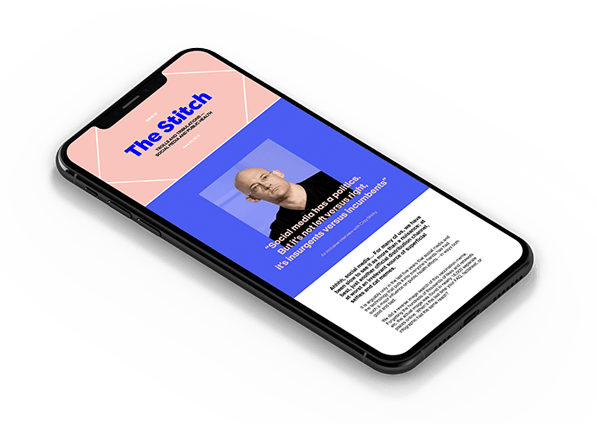